Hit enter to search or ESC to close

You may not realise this, but if you don’t do something about it very soon:

Think we are mad to make these allegations? Think again [see Ref.1].

Why are they even being proposed? As part of the provisions of the Climate Change Act 2008, and by possibly as early as 2030, the government intends to have legislated to ban the sale of internal combustion engined vehicles (ICEVs), whether diesel, petrol or hybrid [Ref.2].

The Parliamentary Science and Technology Select Committee has even gone as far as to say that: “private vehicle ownership and use is incompatible with significant decarbonisation” [Refs. 3, 4, 5, 6].

Not only that, related decarbonisation policies could mean that:

All of this legislation arises from an alleged “Climate Emergency”; to which it is asserted we must respond by the IPCC (Intergovernmental Panel on Climate Change; https://www.ipcc.ch).

This “emergency”, only exists in the computer-generated projections of a tightly-knit cabal of climate modellers and meteorologists. This group not only shuns objective scrutiny of its activities, but also is not above seeking to falsify historical temperature records in pursuit of its aims. Dr Tim Ball’s excellent short book: “Human Caused Global Warming – The Biggest Deception in History” and Andrew Montford’s highly illuminating: “Hiding The Decline” provide supporting evidence for this assertion.

The modellers are aided and abetted by shady supranational politicians and global business interests feigning environmental concern. Michael Moore’s recent: “Planet of the Humans” documentary amply demonstrates how badly the environmental movement’s original goals have been perverted into an unhealthy collaboration with profit-driven multinationals.

Empirical (measured, real world) temperature data do not show any evidence of a catastrophic climate emergency; merely (at best) erratic recent warming; in no way inconsistent with our emergence (which commenced about 11,000 years ago) from the last Ice Age (see Figure below). The overall temperature trend since the Minoan Warm Period peak is worryingly, however, a declining one. 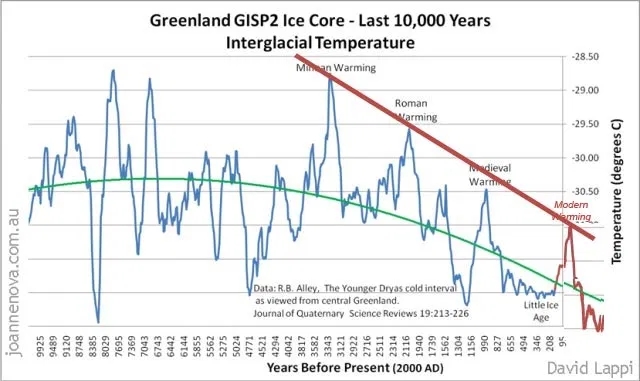 Nevertheless, resulting from IPCC pressure, the UK government committed the United Kingdom (via the 2008 Climate Change Act) to be Net Zero complaint; meaning our Man-made carbon dioxide emissions would have to be zero by 2050. This was done without carrying out any meaningful public consultation, feasibility study or cost-benefit analysis.

The IPCC goal of eliminating Man-made carbon dioxide emissions arises on the basis that this essential, life-sustaining trace gas is driving change in the global climate. This lacks scientific rigour on even cursory examination. Over a geological timescale, there is a very poor correlation between carbon dioxide levels and temperatures see: e.g., https://www.bruceonpolitics.com/2020/01/28/climate-graphs-that-prove-the-lie/.

Looking in more detail at even recent history, for periods in the mid-20th century, the global climate cooled significantly. If atmospheric CO2 were driving global temperatures, a substantial fall in atmospheric CO2 levels would have preceded – and hence driven – the temperature fall. No such atmospheric carbon dioxide level decline was observed; only a continuing monotonic rise (see: https://wattsupwiththat.com/2012/04/11/does-co2-correlate-with-temperature-history-a-look-at-multiple-timescales-in-the-context-of-the-shakun-et-al-paper/). For some reason NASA has removed this record at http://earthobservatory.nasa.gov/Features/ArcticIce/Images/arctic_temp_trends_rt.gif from its website.

The effect of even global adoption of Net Zero policies on temperature change would be minimal: an estimated 0.1°C by 2050 and 0.2°C by 2100 [Ref.7]. The UK contributes just 1% of Man-made CO2 emissions; which are themselves only about 5% of the gases’ total emissions: 95% of which arise from natural sources.

There is a further very large elephant in the IPCC’s room. The policy being pursued by it has the potential to put the entire terrestrial ecology at risk. Far from being anywhere near the high end of historical atmospheric carbon dioxide levels, the current 0.042% (420ppmv) is actually uncomfortably close to the minimum level (c.170ppmv) for plant life to be sustainable.

If, as some climatologists and solar cosmologists are predicting, we are on the verge of a Grand Solar Minimum, the rapid cooling which this would precipitate could depress atmospheric CO2 levels towards this sustainability minimum; due to the enhanced sea-water solubility of the gas at lower ocean temperatures. See the figure below.

A final sobering thought: the Global Warming Policy Foundation estimates the cost of implementing Net Zero policies to the UK economy; .i.e., to its taxpayers, is £3 trillion. This is £100,000 per household, or equivalent to annually funding a £100Bn HS2-scale project every year for the next three decades.

So besides massive liberty and mobility restrictions, you will also be substantially more impoverished. Do you recall being given any opportunity to influence this legislation? Perhaps this scenario for your future doesn’t appeal? Then you need to start doing something NOW about stopping it from happening; otherwise you and your descendants will not only be substantially more impoverished, you’ll also be relegated to climate serfdom.